Last week I had the extraordinary opportunity to witness and participate in a reenactment of one of the highlights of my life and a significant event in antiwar history, the 1970 court suit against the Army, Cortright v. Resor. The reenactment took place on May 8 in a courtroom of the Second Circuit Court of Appeals in the Thurgood Marshall United States Courthouse in New York.

The program was sponsored by the Federal Bar Council Inn of Court before an audience of more than 100 jurists, attorneys, and legal professionals. Participants were able to earn Continuing Legal Education credits for attending.

The past President of the Federal Bar Council Inn of Court, Honorable Denny Chin, recently contacted me about the reenactment. A sitting member of the Second Circuit, Judge Chin explained that he and his teams at the Inn of Court create reenactments of major constitutional law cases that have come before the court, and they were planning to present my case as a test of the First Amendment rights of soldiers to dissent against the war. He interviewed me about the case and asked if I wanted to attend. Of course, I said yes.

In the court case many years ago, I joined with other members of the 26th Army band at Ft. Hamilton New York to file a suit against the Army for denying our First Amendment right to speak out against the Vietnam War. We argued that the punitive transfers and work assignments that had been imposed against our unit were an unconstitutional attempt to silence our dissent. We had signed a public petition against the war that appeared as a full-page ad in the November 9, 1969 issue of the New York Times, and we were involved in a second petition that our commanders suppressed. 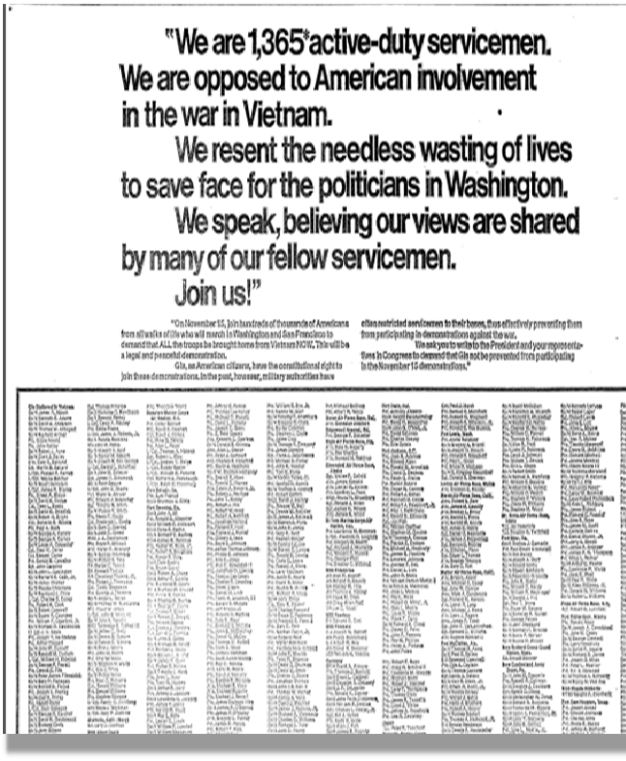 Also at issue in the case was an incident in which several band member wives and my fiancée at the time protested against the war during a Fourth of July parade at which the band was performing. The Army claimed that the transfers and onerous work duties imposed against us were for military necessity, but we had evidence and argued in court that these actions were specifically intended to suppress our right to speak out and get rid of me as an antiwar “troublemaker.”

We filed our case in Eastern District Federal Court in New York in July 1970. The presiding Judge Jack Weinstein ruled in our favor in March 1971 holding that my transfer was an improper attempt to deny constitutional rights and ordering that I was to be transferred back to Ft. Hamilton from Ft. Bliss Texas where I had been sent. The Army appealed the case to the Second Circuit Court of Appeals, where Chief Judge Henry Friendly led a three-judge panel. A few months later the appellate judges ruled two-to-one to overturn the decision of the District Court, expressing judicial reluctance to interfere in the internal decisions of the Army. We then appealed to the Supreme Court but were denied review in the spring of 1972.

For the reenactment last week Judge Chin and his team prepared a tight 55-minute script of the case based mostly on transcripts of federal court proceedings and rulings. The script included excerpts from oral testimony in the District Court hearing; portions of Weinstein’s decision in our favor; oral arguments in the Second Circuit hearing; excerpts from internal voting memos of the three Second Circuit judges; and excerpts from the final decision of the Second Circuit to overturn our case. The script concluded with vignettes about the careers of those involved, especially Judge Weinstein, who became a legend at the bench.

It was an amazing and almost surreal experience to relive the case and see our words and actions dramatized. The reenactment brought that experience to life and deftly presented the core arguments and judgments at stake. Members of Judge Chin’s team played the roles of those involved: me, my fiancée, some of the other members of the band who testified in court, the attorneys for our side and the Army, the military commanders who were ordered to testify in court, and the judges who presided. It was fascinating to hear the arguments and written reflections of Judge Weinstein and the appellate jurists as they pondered the issues in the case and made their decisions. The reenactment even included a short vignette in which three women picked up antiwar posters and paraded around the courtroom shouting “Nix on War” and “Kill Poverty Not People” (the actual slogans the women used back in the day).

Accompanying the reenactment was a slide show presenting images of the New York Times petition, scenes of antiwar soldiers marching in Vietnam peace rallies, photos of judges Weinstein and Friendly, and the iconic Richard Avedon photo from 1969 in which I appeared with a dove above the slogan, “who has a better right to oppose the war.”

Judge Chin’s reenactment not only captured the emotion and drama of that experience but also brilliantly articulated the legal issues at stake. Federal judges do not normally interfere in the operations of the Army, as decided in Orloff v. Willoughby, but in this case, senior military officers admitted in court that I was transferred because of my antiwar activities. The Army tried to argue that the transfer was a normal administrative procedure, but our side proved that the generals singled me out for a transfer because of my role in organizing the petition. The Army argued that the band was a public relations unit and should not present antiwar views, but we never protested while performing for the Army.

The case also hinged on the Army contention that we should have controlled our wives and prevented the protest at the Fourth of July parade. The Army argued that we were responsible for the actions of the women, a view which our senior attorney Fred Cohn called “a most chauvinistic attitude.” I testified in court that we knew of the women’s plan to protest, but we did not initiate or organize the action. I didn’t think a demonstration at the parade was a great idea and worried that it could cause trouble, but I did not feel I could tell my fiancée and the other women what to do. The protest of the women did indeed cause a disturbance among people watching the parade, requiring police intervention and resulting in newspaper stories about the incident the next day. That was the precipitating event that convinced the Army to crack down on us and transfer me out. In effect, we were being punished because of the actions of our wives and my fiancée.

At the end of the reenactment, I was introduced and stood to read a few lines from the script about the purpose of our action. In response to a question, I explained that the experience of opposing the war and suing the Army changed my life and gave me a sense of purpose. I committed myself to working for peace and I am still at it nearly 50 years later. Were you scared back then, another young lawyer asked. “Terrified,” I replied. We were operating in uncharted territory and were afraid of what might happen, but we felt a moral obligation to speak out against an unjust war.

Judge Chin came up to thank me and the audience rose in a standing ovation. I thought their enthusiasm was for the presentation, which was truly excellent, but the judge wrote the next day that the applause was for me. Many people came up to me afterwards to thank us for standing up for what we believed. I felt proud to have brought the lawsuit and thrilled to be part of an event that preserves a key piece of the history of antiwar dissent in the Army during the Vietnam War. 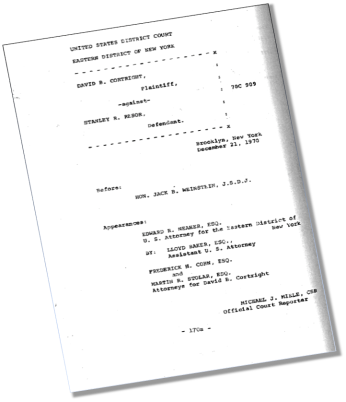 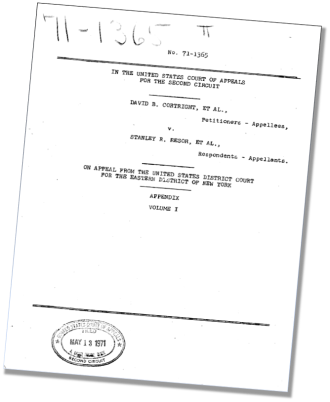