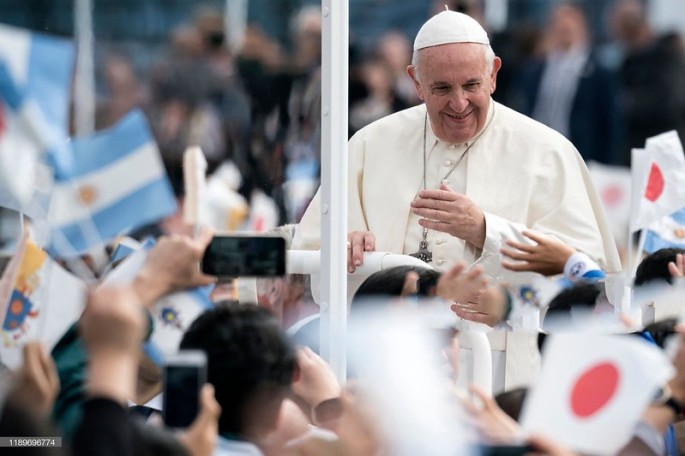 Let us be thankful for the statement released last week by the U.S. Catholic bishops urging the United States to “take the lead in mutual reduction of nuclear weapons” as a step toward their complete elimination. The statement was a response to Pope Francis’ November visits to Hiroshima and Nagasaki, where the Holy Father called for a “world of peace, free from nuclear weapons,” and declared that using atomic energy for war “is immoral, just as possessing of nuclear weapons is immoral.”

In other recent statements, the bishops have expressed concern about the erosion of support for nuclear arms control agreements. In a November letter to members of Congress, they urged support for efforts to extend or replace the existing 2010 New START Treaty, which places limits on the number of U.S. and Russian strategic nuclear weapons. Russian President Putin has stated on several occasions that Moscow is ready to sign immediately a five-year extension of the New START agreement, a pledge that was reiterated again in December. To date the White House has not reciprocated.

If the agreement is not renewed by early next year, essential on-site inspection and verification protocols from the Reagan era will expire. The two sides would lose vital technical abilities to monitor each other’s nuclear capabilities, and for the first time in many decades, there would be no legally binding and verifiable limits on U.S. and Russian nuclear weapons.

Nuclear weapons issues are not on the public agenda these days, but they should be. The U.S., Russia and other countries are spending hundreds of billions of dollars to rebuild and upgrade nuclear weapons systems. The U.S. is back in the business of building new nuclear bombs, including so-called low-yield warheads that are designed to be more usable. The 2018 U.S. Nuclear Posture Review allows for a wider range of uses of nuclear weapons and asserts the right to launch nuclear strikes in the event of “significant non-nuclear strategic attacks.” That’s a formula for first use of nuclear weapons.

Let us join Pope Francis and the U.S. bishops in demanding action to reduce the growing nuclear danger. A modest first step in that direction is to join in the call for the U.S. to cooperate with Russia to renew and extend the New START Treaty.